It is the oldest, largest continually operating outdoor market in the USA, operates on hundreds of acres, and provides spaces for about 6,000 vendors.

The map shown to the right gives an overall orientation to the First Monday area for new shoppers.

And posted on this website is the 2021 schedule of Canton First Monday flea market dates.

First Monday consists of a number of buildings, pavilions, and shopping areas, including but not limited to the following venues: 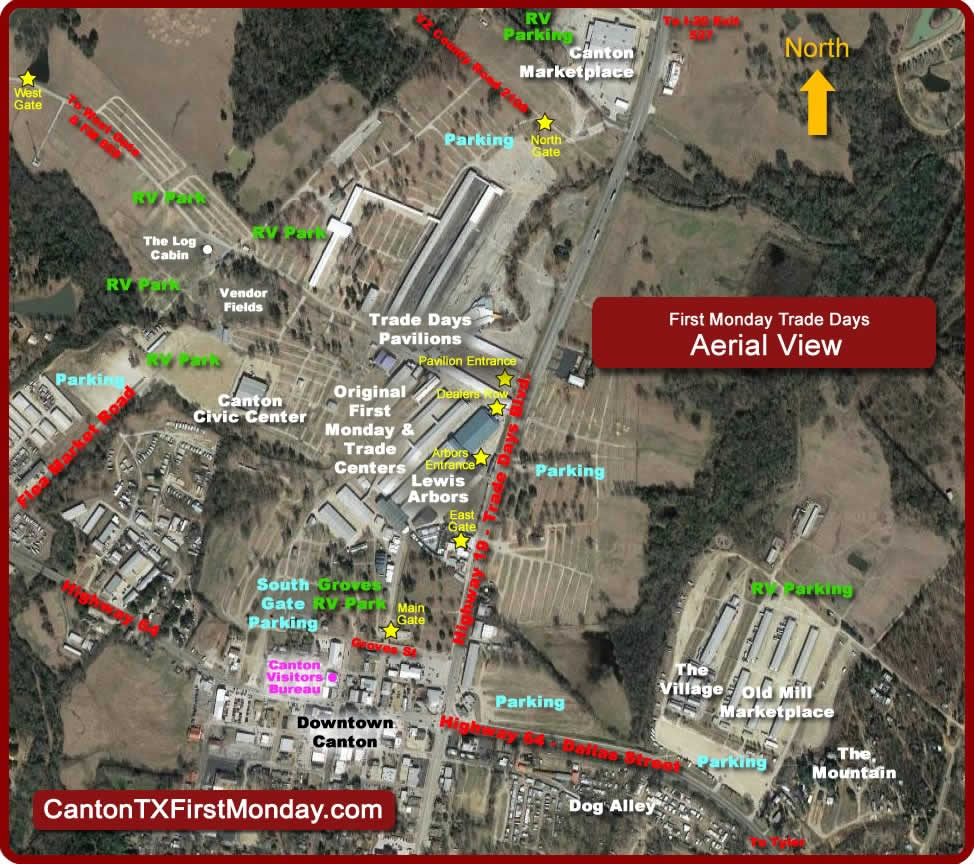 How to Get to First Monday Trade Days

Access to the First Monday flea maket from Dallas-Fort Worth or Shreveport is via Interstate 20. Tyler is only about a 40 minute drive from Canton.

While several exits are available for Canton, most visitors choose to use Exit 527, which is Texas Highway 19, also known as Trade Days Boulevard. We've included on this website a list of driving times to Canton from Texas cities.

Other Canton exits are shown below.

There is generally a small charge, usually $5, for parking ... have cash available.

Shopping is what First Monday is all about, and hundreds of vendors offer products from Texas, across the country, and worldwide.

Where Are the Entrances and Gates?

There are several entrances, and gates, to the popular areas of First Monday, i.e., the original First Monday park and the adjacent Lewis section. See the yellow "stars" on the aerial map above for locations of the gates.

A variety of hotels, motels and B&Bs are available in Canton, Tyler, and several nearby towns such as Athens, Lindale, and Mabank.

Several hotel and motel properties are located in Canton. We have no affiliation with any property, but provide the following reviews at TripAdvisor to give you a starting point for selecting your lodging accomodations:

A number of RV parks are also located in the vicinity.

Just like you've heard from your friends, Canton First Monday is BIG!

First Monday Trade Days in Canton, Texas is considered the largest flea market in the United States. It is big, spread out on hundreds of acres at multiple venues, and offering spaces for about 6,000 vendors.

Getting oriented can take a while for first-time shoppers ... but we have included some tips to make you a Canton expert!

Copyright © 2022 • CantonTxFirstMonday.com • All Rights Reserved
This website is operated by a private entity with no connection to, or affiliation with,
the City of Canton, First Monday Trade Days, or any shopping venue